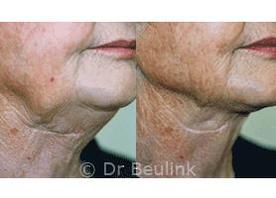 In the quest for a natural, streamlined body, Dr Beulink offers his patients a fully integrated approach to remove fat, sometimes even transferring or redistributing fat if necessary, to sculpt silhouettes. Rather than simply providing liposuction, he is a medical artist, moulding and re-shaping peoples bodies like a 3 dimensional sculpture, using an approach which is fully customised to each individuals needs.

Liposuction is an aesthetic (cosmetic) surgical procedure designed to remove localised collections of fat, and thus may be used to improve your overall body appearance. It is not a substitute for weight reduction, nor is it a cure for obesity. Ideally, liposuction is for the removal of typically stubborn areas of genetic or age related fat, such as those that occur on the hips, thighs, buttocks and abdomen, as well as the arms, neck and under the chin.

Your appearance after liposuction will be influenced by your general state of health, the overall condition of your skin, age, weight, hormonal influences, and other factors. Liposuction selectively removes fat only from those areas in which the patient desires reduction. Since fat cells are removed, the procedure is deemed permanent, and following liposuction the body will always have less fat cells in the treated areas. However, should the patient gain weight following liposuction, the results may be compromised: the total number of fat cells may have been reduced following liposuction, but if someone was to put on weight, those remaining cells in that area will simply swell up in size with fat oil until maxed out, after which the excess calories will be stored into the next susceptible area.  An essential prerequisite of liposuction is a stable or reducing weight, and a healthy active lifestyle.

At our clinic we only use the modern small cannula, tumescent liposuction technique. This technique involves the use of a dilute local anaesthetic administered to the area to be treated. This not only completely numbs the area, but also contains anti-bleeding agents and aides the removal of the fat cells during the suction process.

When combined with a mild sedative, tumescent liposuction has minimal or no discomfort, with patients feeling very relaxed and often sleeping throughout the majority of the procedure.

Liposuction with the modern small cannulas enables a more gentle and precise removal of fat. There is no scarring and, because it is performed under local anaesthesia, it is very safe with far fewer risks than the traditional method, which is performed under a general anaesthetic. Essentially, tumescent liposuction is a walk in, walk out procedure with a faster recovery time.