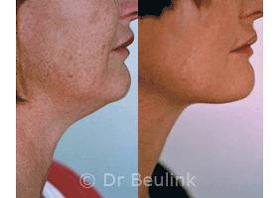 Injection lipolysis/lipodissolving injections, is a non-invasive procedure that requires multiple fine injections of active ingredients into the treatment area beneath the skin to seemingly melt away fat and expel it from the body. The theory behind lipolysis is that together the ingredients cause fat to liquefy or dissolve and be eliminated from the body. Various ingredients may be used including combinations of vitamins and certain medications, depending upon the particular clinical condition. This can be an effective treatment to remove pockets of fat on the face, neck and body.

Belkyra (also known as Kybella in some countries) is a trade brand injection lipolysis (fat dissolving) solution made by Allergan that has been widely marketed with much hype, fanfare and expectation. However, Dr Beulink tried this product when it first came to the market, and found it's clinical results fall well short of it's claims.

Compared to the traditional lipolysis/lipodissolving solution recipies that Dr Beulink has been using since 2002, Belkyra is more expensive, gives disappointing results, virtually always needs to be up-sold for more treatments than the company pamphlet information/recommendation suggests, and has all the potential clinical problems and possible side affects that the traditional lipodissolving solutions were widely criticised for.

And now for the history lesson that explains how and why:

Essentially between 2010 and 2015, traditional lipo-dissolving solutions and treatments (which had been around for many years) began getting extensively slammed by the media, driven by misguided information and advice arising from the pharmaceutical industry and various vested interests in the medical field. The end result of this, was the art of lipodissolving was virtually driven out of existence, only to be replaced by a single trade named lipo-dissolving product:  Belkyra.

For those who don't know, the really interesting thing here is that Belkyra (whose drug name is Deoxycholate or Deoxycholic Acid) is actually one part of that original lipodissolving solution recipe. However, as it just so happened, deoxoycholate was the only product in that recipe that didn't have, but could have, a commercial patent slapped on it!
So picture the scene: drive out traditional lipodissolving with an aggressive negative campaign, secure the rights to a product in that original successful recipe, relaunch and market that product to the masses in a neatly packaged, standardised, "one vial fits all" type scenario and viola, welcome to the next best new thing: BELKYRA, the new billion dollar injectable for busting fat.

Take a look at the side affect profile of Belkyra (it's pretty heavy!). And it's full of precautionary advice and warnings to the injecting doctors regarding swelling, excessive tissue damage, skin necrosis(death), infection etc etc.
In fact, following Belkyra's initial launch, they soon realised that in the clinical setting, Belkyra had a big problem:- it is potentially disastrous. Every problem that the traditional lipodissolving solutions were slammed for, were and are in fact inherent to Belkyra. This is because deoxycholate (Belkyra), is part of that original mix, and is, and always has been, the major cause of those side affects since the very beginning.
Isn't it a bit strange that the original lipodissolving procedure and recipe containing the deoxycholate got such huge negative worldwide publicity, whereas now deoxycholate rebranded as Belkyra, is considered acceptable?

The problems for Belkyra were so bad following it's launch, they had to do some serious rethinking. It's world wide launch ground to a holt as they tried to buy themselves time to try and sort it out. It took 4-5 years for it to finally be given to Australia and New Zealand, and by that time its use had been highly restricted to doctors only (ever wondered why nurses inject everything other cosmetic product, but are not allowed to inject Belkyra?). By restricting it to doctors only, and by seriously dumbing down the way it is used, a palatable lid has been kept on problematic Belkyra.

So where does Belkyra sit. I believe it is limited. Limited by it's restriction to only being allowed to be injected under the chin. Limited due to it's high side affect profile. Limited by it's poor results. Limited because it needs more treatments, meaning more cost (initially launched as 2 treatments, each treatment being 1 vial of Belkyra. Most clinics will now advise 3-6 treatments: that's a lot of needles and a lot of expense - ouch!). Limited to a dumbed-down type treatment that follows a one policy fits all mentality (the packaging actually comes with a plastic grid sticker that injectors are supposed to stick onto the skin and then with the needle just "follow the dots". Fool proof right??)

THE BELKYRA MYTH..... TO BE CONTINUED

The cosmetic application of injection lipolysis in our clinic includes removal of small, stubborn, unwanted pockets of fat that are resistant to diet and exercise, reduction of lower eyelid pads, double chin and jowl areas, body sculpturing and defining body contours. Lipolysis is not suitable for weight loss and should be combined with a healthy lifestyle including a sensible exercise and dietary programme for optimal results. Some fat deposits are especially suited for treatment while others are not. Sometimes lipolysis may be combined with tumescent Liposuction for best results.

Treatments consist of 1 to 4 treatments (usually 2 or 3) approximately 4 to 6 weeks apart, depending on healing. Following each treatment localised swelling, redness and a light burning sensation is expected and usually lasts 12 to 24 hours. Moderate swelling can last for a few days. A more persistent low grade reaction phase consisting of firmness or thickening then occurs, usually lasting for approximately three weeks. Many patients see a result after the first or second treatment, although for optimal results extra treatments may be required. 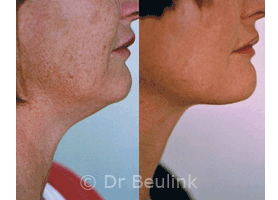 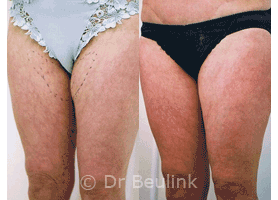